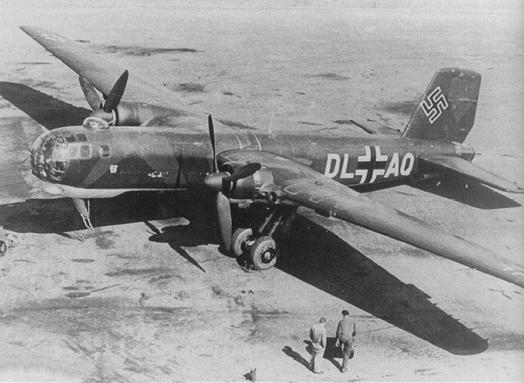 
The He 177 V1 to V8 and the A-0 production prototypes are notable for having a broad-bladed set of four-bladed propellers, with blade shapes and profiles similar to those used on the Junkers Ju 88 medium bomber. These were not used on the production He 177A series aircraft.

Photographs of the first eight prototypes show a largely circular fuselage cross-section, especially forward of the wing root, with the A-0 series possessing flatter sides, dorsal and ventral surfaces of the main A-series production aircraft. The choice of what was called the "Cabin 3" cockpit design on 20 September 1939 for the production A-series run, placed a well-framed hemispherical "fishbowl" nose onto the He 177 A-0, giving it the generic "stepless cockpit", without the separate windshield for the pilot and co-pilot, that beginning with Heinkel's own He 111P almost all German bomber aircraft had in World War II. The forward glazing of the He 177A's "stepless" cockpit had each set of its characteristic framing members, of four supporting frame members per set running in each orthogonal direction, running as the parallels and meridians on a globe would. Two sets of four almost square windows, themselves arranged in a square of four windows each on each side of the upper cockpit, just behind the "fishbowl's" rear edge, provided sideways vision from the cockpit for the pilot and crew. Photographic evidence shows these side windows were produced with slight differences in external appearance between those built by Heinkel (with its primary headquarters, Heinkel-Nord plant near Rostock, and the satellite Heinkel-Süd plants around Vienna) and those built by Arado Flugzeugwerke, the only major subcontractor for the He 177A's airframes. Often, the two lower rows of the "fishbowl's" windows in the nose glazing were made opaque, with the exception of the bombardier's protruding bombsight window offset to starboard in the lower nose glazing, either by painting them over or replacing them with metal panels that performed the same function.

He 177 A-1
First production series, 130 built. Armed with a single MG 81 in the nose, a single MG FF cannon in the forward end of the Bola ventral gondola, a remote controlled dorsal turret with a single (later twinned) MG 131, and a single tail mounted MG 131.

He 177 A-1/R1
Equipped with a supplementary pair of aft firing MG 81 in the rear of the ventral gondola.

He 177 A-1/R2
Equipped with a sighting station in the rear of the ventral gondola for a remotely controlled ventral turret housing a single MG 131.

He 177 A-1/R4
Equipped with a supplementary aft firing MG 131 in the rear of the ventral gondola and a manned aft dorsal turret containing an MG 131.

Experimental defensive weapons were also fitted to a small numbers of 177s set aside for such trials, mostly at the Erprobungstellen test detachment fields. One He 177A-1, s/n 15155 and bearing the Stammkennzeichen GI+BP, was fitted with the first-ever example of an He 177 to be fitted with an experimental, remote control twin-gun "chin turret" at the front of its Bola undernose gondola.

He 177 A-2
Proposed four-man pressurized variant with reduced defensive armament of six MG 81 and a single MG 131, never built.

He 177 A3 50mm Bordkannone
When assigned to flak-suppression sorties in the area of Stalingrad during the winter of 1942, Luftwaffe forward maintenance units modified a small number of  He 177A-3s, fitting a 50 mm Bordkanone BK 5 cannon with the 21-round magazine within the aircraft's undernose Bola gondola, with the long barrel protruding well forward, beyond the glazed "fishbowl" nose. This variant was unofficially dubbed the Stalingradtyp.

He 177 A-3/R5
Stalingradtyp version armed with a 75 mm Bordkanone BK 7.5 cannon based on the 7.5 cm PaK 40 installed in the ventral gondola, also used on the Junkers Ju 88 P-1 only five built. Only a small number of He 177 A-3/R5 models were built from scratch as the autoloading 75 mm Bordkanone BK 7,5 in the Bola location with its 12-round magazine, caused structural problems due to the weapon's recoil. This meant that the Stalingradtyp did not see combat use outside of the original BK 5-armed improvised handful.

He 177 A-4
Proposed high altitude pressurised version, never built under the designation, and later developed into the Heinkel He 274.

He 177 A-5/R5
Equipped with a supplementary pair of MG 131 in a remotely controlled ventral gun barbette position aft of the rear bomb-bay, only one built.

He 177 A-5/R8
Armed with remotely controlled chin and tail barbettes. Abandoned as a result of difficulties with the turrets, only one built.

He 177 A-5 Grosszerstörer
Anti-bomber variant based on the He 177 A-5, armed with 33 spin-stabilised 21 cm calibre rockets obliquely mounted in fuselage, supplanting bomb bays and auxiliary fuel tanks, and most likely based on components of the 21 cm Nebelwerfer 42 barrage rocket system. Five examples delivered in January 1944 for operational trials. Abandoned due to increasing numbers of Allied escort fighters.

He 177 A-6
Extensively revised and pressurised proposal for a high-altitude, long-range model with reduced armament, as on the A-2 and A-4 proposed high=altitude versions. This version had a tail turret and the capability to carry Fritz X and Hs 293. Never built, as it was abandoned in favor of the "paper-only" He 277 B-6.

He 177 A-6/R1
Rear dorsal turret deleted and tail position replaced by He 177B series HL 131V "quadmount" manned tail turret armed with a quartet of MG 131 machine guns, was tried in the late spring and summer of 1943. A a trio of A-3 examples were set aside as the V32 through V34 prototypes, but the innovation never made it to production status, only existing as a series of engineering department mockups with Heinkel and Junkers,.  Deletion of the two forward bomb-bays and the addition of external bomb rack capable of carrying a single 2,500 kg (5,511 lb) bomb or Fritz X/Hs 293 in addition to the rear bomb-bay loadout. Range of 5,800 km (3,604 mi), only six test conversions built.

He 177 A-6/R2
Equipped with a redesigned fuselage nose of improved aerodynamic form. Armed with a pair of MG 131 in a remote chin barbette, a single MG 131 in a rear ventral position, a pair of MG 151 cannon in a remotely controlled forward dorsal barbette, and an MG 131 "quadmount" tail turret. Similar bombload and range to He 177 A-6/R1, only one test conversion built.

He 177 A-8
First proposed He 177 design to feature four individual engines, using the A-3 or A-5 fuselage with a new wing design, and either Daimler-Benz DB 603 or Junkers Jumo 213 engines with Heinkel He 219 style annular radiators. Remained a paper project only, before re-designation as the "He 177 B-5" in August 1943.

He 177 B
Developed as the direct, "separate four engined" development of the "coupled engine" powered He 177A-series, four prototypes ordered (He 177 V101 to V104) with three built and flown. Originally postulated in postwar aviation books to have been a "Cover designation" for the never-produced, paper-only He 277.

He 177 H
Initial project designation for the Heinkel He 274.

One development proposed during 1943 was to create a chin turret using the earlier Hecklafette's quadmount gun elevation assemblies to either side of a new, remote-control traverse core as the Bugstandlafette BL 131V, located at the forward end of the He 177A's Bola undernose gondola. However, engineering studies of the quadmount chin turret project revealed that its fitment, proposed for a number of the later He 177A variants and the He 177 V104 prototype airframe, would lower airspeed by some 30 km/h (19 mph) and reduce the deployable bombload by a full tonne, making the BL 131V concept unacceptable, and prompting the idea of using a chin-turret mount version of the FDL 151Z twin-cannon remote turret instead for the B-series, four-DB 603 engined He 177Bs, close to what had been pioneered with the GI+BP airframe early in 1943.[28]