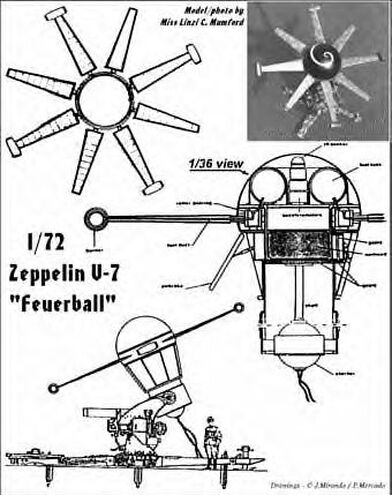 ​The fourth weapon was the enlarged version of the WNF Feuerball which started in 1943 but was not deployed until 1945, shortly before collapse. This was the Zeppelin Werk Kugelblitz (Ball Lightning) which was larger than a Feuerball and powered by a total reaction engine burning a gelatinous, metallic fuel. In addition to the electrostatic weapon, the Kugelblitz also carried an explosive aerosol ejector gun and was fitted with various sensors including the previous plume sensor but now adding to it an infrared sensor and early television guidance. One Kugelblitz (the lone constructed one) destroyed a group of B-24 bombers over Garda Lake using the aerosol weapon which Allied Intelligence quickly reported as German “use of anti-aircraft bombs of firedamp used against the bombers over Garda Lake”.

This project was studied along with the FW "Triebflugel" design and utilized the same lift conception. The Flakmine V-7, called "Feuerball", was formed of the central body storing fuel, explosive (between 250 and 500kg) and vapourization system. A free spinning rotor with four Pubst jets was mounted around this body.
​The ignition and initial rotation was performed on the launch platform. After reaching the circular speed of 200m/sec the blades were tilted to a +3° angle and the machine took off into the air. When reaching the formation of the Allied bombers the Flakmine would have been detonated by means of infrared, radar or acoustic fuse. This weapon might have been highly effective against the Allied bombing raids.