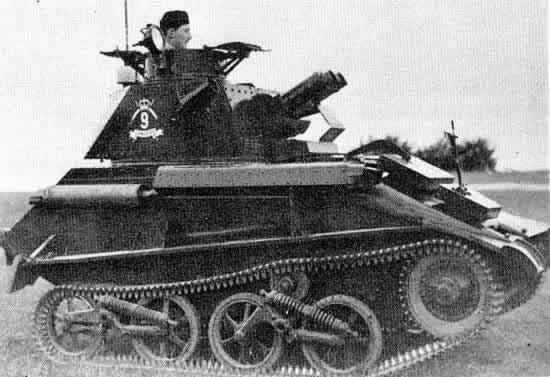 The biggest change from the Mark IV to the Mark V was the introduction of a three-man crew. The turret now carried the commander and the gunner who was also the radio operator. The increase in the crew size made a lot of difference to the tank's effectiveness and spread the maintenance load. Until then, the commander had to direct the driver, navigate, and operate the gun. If troop commander, he also had to direct the other tanks and their fire.
The armament of the Mark V was an improvement over the earlier Marks; a 0.5 inch Vickers machine gun was added to the existing 0.303. This gave the tank a reasonable anti-tank capability against other light tanks—at the time most European light tanks had around 12–14 millimetres (0.47–0.55 in) of armour—but it was not updated as more armoured light tanks came into use. It was half a ton heavier—and about 18 inches longer—than the Mark IV. The weight increase had the effect of reducing the top speed to 32 mph (51 km/h) though range was largely unchanged.

The first tanks produced were sent along with a team from Vickers to the 1st Battalion RTC. This unusual level of cooperation between manufacturer and user led to rapid resolution of problems and implementation of improvements. A total of 22 were produced during 1936.