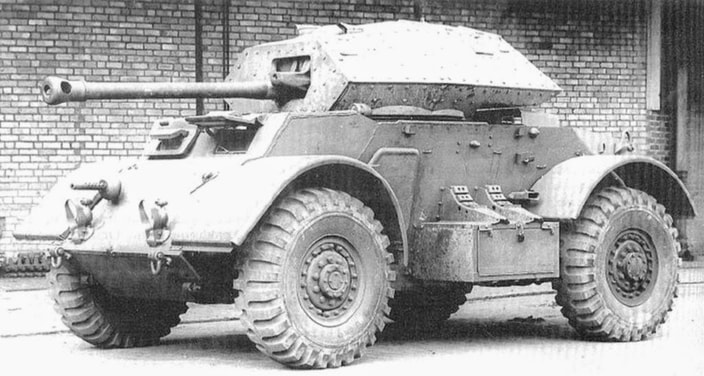 T17E1: 4x4 version built by Chevrolet for Britain. 2,687 – 2,844 units were produced.
The T17E1 was armed with a 37 mm M6 gun, a coaxial .30 cal Browning 1919A4 machine gun and a 2-inch smoke mortar in a rotating turret. In the hull was mounted a .30 cal Browning 1919A4 machine gun.[11] Some T17E1 had an additional .30 Browning 1919A4 cal machine gun for anti-aircraft defense.
The turret had power traverse and featured a turret basket (which limited the amount of internal crew storage). The 37 mm gun was gyroscopically stabilized.
This variant had a crew of 5, commander, loader, gunner, driver, and hull machine gunner.
This variant saw combat with the British, Free Polish, Canadian, New Zealand, Indian, and Belgian armies in Italy, Greece and Northwest Europe.

Staghound Mk II
This was a field conversion that had a 3 inch howitzer Mk 1 for close support mounted in place of the 37 mm gun in the turret. The bow machine gun was removed. It is not known how many were converted. These were issued to the Armoured Car HQ section.

Staghound Mk III
Had a turret taken from an Ordnance QF 6 pounder gun armed Crusader tank and 7.92 mm Besa machine gun. Some of these were then re-fitted with the Ordnance QF 75 mm gun. There was no bow machine gun. These had reached the front line by 1945, where it was supplied to heavy troops of armored car regiments. The total number ordered was around 100–300. After WWII, this version saw usage with Denmark and combat in Lebanon.

Staghound Command
The turret was removed and extra wireless equipment was installed.

T17E2 (Staghound AA)
The T17E2 was an T17E1 fitted with a Frazer-Nash-designed turret mounting two 0.5 inch M2 Browning heavy machine guns. The turrets were built in the US for British Motor Torpedo Boats. Redesign of the turret and mounting was carried out. 2,610 rounds were carried. The turret was open-topped and had an electric-hydraulic traverse system with a maximum slew rate of 55 degrees a second. It had a reduced crew of 3: commander/gunner, loader and driver.
789 units were produced between October 1943 and April 1944, when production stopped.
​
T17E3
T17E1 fitted with the turret of 75 mm Howitzer Motor Carriage M8, carrying the 75mm M2/M3 howitzer. This was trialled in December 1943, but never reached production.