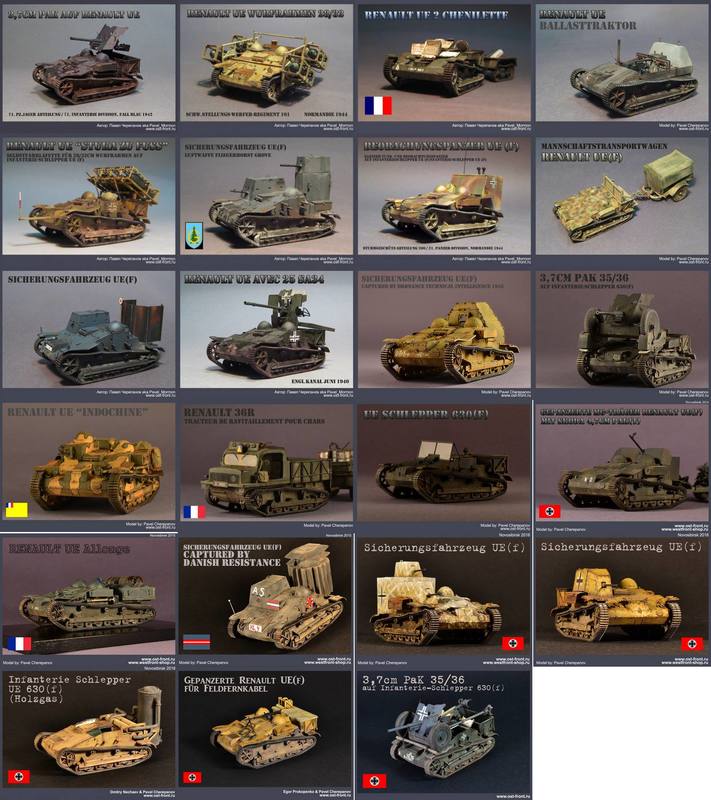 Infanterie UE-Schlepper 630(f)
Germany captured about 3000 UE and UE2s. Most were employed unmodified as tractors for the 37 mm, 50 mm and, ultimately, 75 mm and 76.2 mm anti-tank guns as well as light and heavy infantry guns.

Munitionsschlepper Renault UE(f)
The UE was also used in its primary function as a supply vehicle. Some had an armoured roof fitted above the bin, to protect the ammunition load against overhead shell airbursts.

Selbstfahrlafette für 3.7 cm Pak36 auf Renault UE(f)
A German 37 mm PAK was fitted just in front of the bin. There was no room for the crew in such a small vehicle: the gun had to be operated while standing behind it. 700 were built in 1941.

Selbstfahrlafette für 28/32 cm Wurfrahmen auf Infanterie-Schlepper UE(f)
A late modification from 1943 was the UE fitted with four Wurfrahmen 40 launchers for 28/32 cm rockets, forty of which would be built in two versions, one with the launch frames at the sides of the hull, the other with a raised platform on the back.

Gepanzerte-MG-Träger Renault UE(f), simply a Renault UE fitted with a machine-gun in a superstructure above the commander's seat;

Schneeschleuder auf Renault UE(f), a snow plough, fifty of which were modified in 1942

Schneefräser auf Renault UE(f), also a vehicle intended to combat heavy snow conditions on the Eastern Front, but in the form of a snow miller

Sicherungsfahrzeug UE(f)
An airfield security vehicle produced for the Luftwaffe which, besides the 7.92 mm MG 34 casemate on the right, had a special high armoured superstructure fitted on the left back in which a guard could sit armed with a 13 mm machine-gun