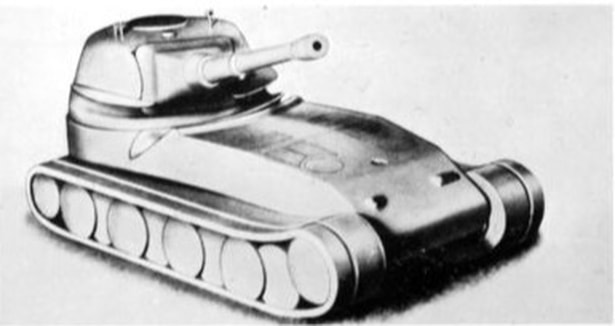 The Tiger-Maus design history is confusing. It's a prime example of how terribly mixed up the German panzer history was and how different designs influence each other.

In March 1942, Germans were no longer meeting the disorganized and devastated Soviet tank troops of 1941. Hitler (and the industrialists) began to play an active role in Panzer development - Hitler specifically ordering (influenced by his personal friend, Dr. Ferdinand Porsche) super heavy tanks.

On 5th March 1942, Krupp recieved a directive that it is to inflate the earlier concieved 70 ton Panzer projects (the Löwe series) to 100 tons. Later in March, Porsche recieved the same order. The "Löwe" line was developed in parallel to a certain extent (the last known heavy Löwe variant - with turret set in the middle - is from May 1942), but in September 1942, the Löwe development was cancelled and the Maus project progressed.

Historically there were three "branches" of the German superheavy Panzer development: the Maus branch, starting with a VK100.01 project by Porsche, moving on to the Maus and ending with Maus II with the new Krupp turret.

The second branch is the E-100 branch by Krupp (later Adlerwerke), being a direct competitor to the Porsche Maus project. This branch started with the Krupp E-100 proposal, the Tiger-Maus and ends with the Adler E-100.

The Krupp Tiger-Maus 150ton tank concept began in September 1942, shortly before the Lowe turret development cancellation. Krupp was basically "taunted" into making a competing concept to Porsche's Maus - a 150ton tank powered by a proposed HL230 1000hp upgrade. The design was made very quickly and in November 1942, it was discussed within the Panzerkomission (a civillian committee of industrialists and tank designers).
​
It was to use the Tiger(H) components, hence the name - including the engine and drivetrain, but there were worries about the insufficient horsepower to weight ratio. The Tiger-Maus was to reach only 20km/h top speed too and its terrain passability (specifically climbing ability) was questioned too. Additionally, there had to be a new final drive and steering unit designed, as the old Tiger one limited the speed further to 13 km/h. Possible engine upgrades, discussed in November 1943, included the Daimler Benz MB501 and MB503 1200hp gasoline engines and the MB507 1000hp engine.

In the end, the Krupp hull weighed 122 tons and was to be powered by a 1200hp MB507 engine. The armament was the 150mm L/37 gun and a 75mm L/24 secondary cannon in a 47,5ton turret, making the vehicle nearly 170 tons. On 1st December 1942, the project was named "Tiger-Maus".
During the further development, significant changes were made. By shortening the chassis (and widening it for better ground pressure), the proposed weight dropped to 130 tons and the drivetrain components were taken from the Tiger II. The engine used was the Maybach HL230 with 700hp. The armament remained the same, the vehicle had a proposed crew of six. The vehicle had the advantage that it used many existing components and could be quickly produced - the 130t design was ready on 8th December 1942.

It was recieved very favourably at first - but then, arguably Porsche's friendship with Hitler played a role and the decision to develop this vehicle further was overturned. On 15th December 1942, Krupp recieved an order to stop the Tiger Maus development, allegedly because the German military wanted to avoid the dual development of the Tiger and Porsche's Maus was scheduled for development instead of the Tiger-Maus. Krupp representatives even met with Hitler personally, but without success - on 31st December 1942, the Tiger-Maus development was stopped.

The Tiger-Maus later turned into the E-100 project by Adler. There are no original Tiger-Maus drawings unfortunately, so we can only guess how it could have looked.