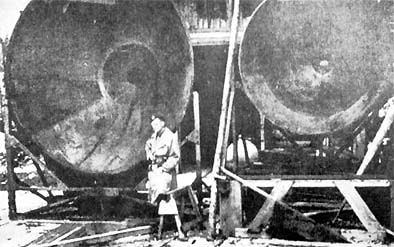 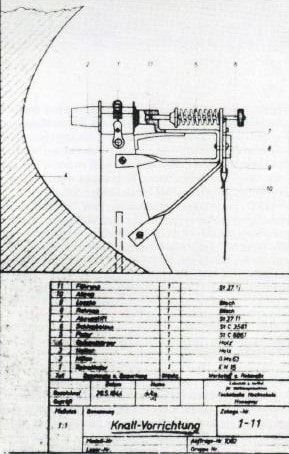 During the early 1940s Axis engineers developed a sonic cannon that could cause fatal vibrations in its target body. A methane gas combustion chamber leading to two parabolic dishes pulse-detonated at roughly 44 Hz. This sound, magnified by the dish reflectors, caused vertigo and nausea at 200–400 metres by vibrating the middle ear bones and shaking the cochlear fluid within the inner ear.

At distances of 50–200 metres, the sound waves could act on organ tissues and fluids by repeatedly compressing and releasing compressive resistant organs such as the kidneys, spleen, and liver. (It had little detectable effect on malleable organs such as the heart, stomach and intestines.) Lung tissue was affected at only the closest ranges as atmospheric air is highly compressible and only the blood rich alveoli resist compression. In practice, the weapon was highly vulnerable to enemy fire. Rifle, bazooka and mortar rounds easily deformed the parabolic reflectors, rendering the wave amplification ineffective.

Besides the Vortex Gun and Wind Cannon, invisible and powerful air waves were used in another device designed by scientists at Lofer, in the form of the so-called "sound cannon." Designed by Dr. Richard Wallauschek, the cannon consisted of large parabaloid reflectors, the final version of which had a diameter over 3m. The "dishes" were connected to a chamber composed of several sub-unit firing tubes.
The function of these tubes was to allow an admixture of methane and oxygen into the combustion chamber, where the two gases were ignited in a cyclical, continuous explosion. The length of the firing chamber itself was exactly a quarter of the wavelength of the sound waves produced by the on-going explosions. Each explosion initiated the next by producing a reflected, high-intensity shockwave, and so creating a very high amplitude sound beam. This high and strong note of unbearable intensity was emitted at pressures in excess of 1,000 milibars about 50m away. This level of pressure is above the limits that man can endure. At such a range, half a minute of exposure would be enough to be lethal. At longer ranges (about 229m), the effect would be excruciating and a soldier would be incapacitated for some considerable time afterwards. No operational or physiological tests were ever carried out. It was suggested, however, that laboratory animals were used to prove the basic soundness of the concept. The cannon was never deployed for its intended purpose.
Toward the end of World War II, the Germans were reported to have made a type of acoustic device. It looked like a large cannon and sent out a sonic boomlike shock wave that in theory could have felled a B-17 bomber.