​The blueprint was drawn in a 1:40 scale and shows a side, top, and front view of the vehicle, as well as details of the doors. 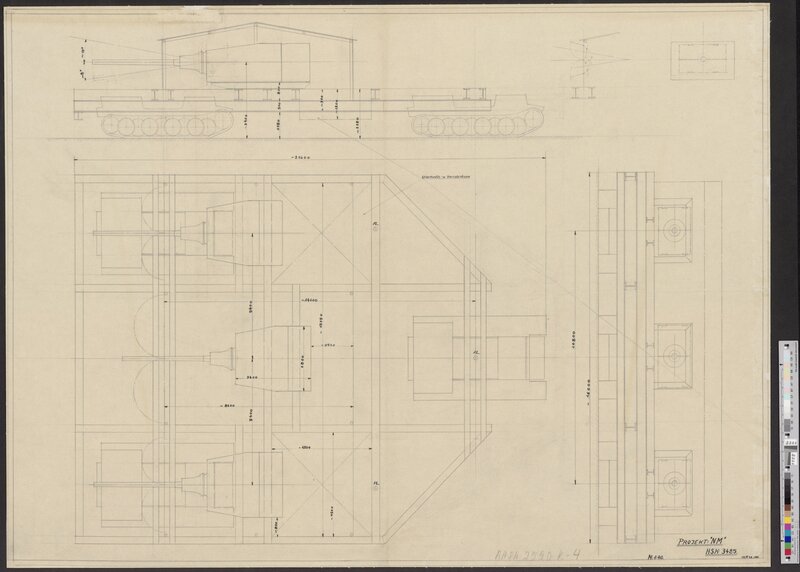 Forming the base of the vehicle are three modified Tiger hulls, each with a U-shaped cutout in the area of the turret ring, which is implied to hold a gimbaling system that supports the vehicle’s frame. The tanks are arranged in a tricycle configuration, with a single tank at the front of the vehicle, and two in the rear. Lengthwise, the distance between the pivot point of the forward tank hull and the pivot points of the rear tank hulls is 14 meters (45’ 11’’). A faint outline of the rear tank hull in the blueprint side view shows that the rear hulls would be able to pitch up to 15.5° up or down relative to the frame. A similar range of motion is likely for the forward tank hull, but this is not shown in the blueprint. It has been theorized that these Tiger hulls would be made out of mild steel of thinner gauge than the normal tank, as the NM would not likely be intended to take enemy fire, and this alteration would save weight. Alternatively, the NM may have incorporated older non-combat-worthy Tigers that were gutted and repurposed.

Forming the backbone of the vehicle’s frame are four longitudinal I-beams, connected by ten transverse I-beams. All of the transverse I-beams sit atop of the longitudinal I-beams, apart from the one at the very rear, which is attached underneath. There are three main transverse I-beams that run the full width of the vehicle and are merely structural to the frame. Three shorter beams, spanning one-third the vehicle’s width each, sit one under each turret, on either side of the main structural member. At the very front of the vehicle and toward the rear, are two sets of two slightly thinner I-beams, which run the width of the frame and attach to the pivoting mechanisms on the tank chassis. The front corners of the otherwise square frame are rounded off into triangular sections. Faint lines on the blueprint evidence that, in an earlier iteration, these triangular sections extended all the way beyond the front of the forward tank hull, and were joined by another underslung transverse I-beam, similar to the one at the rear. This was likely determined to be unnecessary, and the frame was cut back to just meet the center of the forward tank hull. The vehicle would measure about 21.6 meters (70’ 10’’) in total length and 16 meters (52’ 6’’) in total width. Extrapolating from other values on the blueprint, the height of the vehicle can be calculated to be 5.15 meters (16’ 11’’). The bottom of the longitudinal I-beams would be 1,180 mm (3’ 10’’) off the ground. The height of each of the I-beams was 500 mm (1’ 8’’), meaning the frame accounted for a full meter (3’ 3’’) of height by itself. This would mean the top of the frame would sit 2,180 mm (7’ 2’’) off the ground, however, the blueprint shows this to be 2,280 mm (7’ 6’’). Most of the numbers given on the blueprint are approximate values, leading to such inconsistencies.

Mounted on top of the vehicle’s frame were three turrets, each housing a single 150 mm cannon. The central turret was staggered slightly behind the two outer turrets, which were placed just ahead of the rear tank hulls. All three of the turrets faced over the rear of the vehicle. Two 300 mm (1’) tall I-beams are placed longitudinally under each turret. The ends of these beams are shown to be cut down into points; the reason for this is unknown. The turrets rest directly on these I-beams, without any turret rings having been drawn. Should the design have advanced any further, this obviously would have needed to be changed. The turrets themselves measure 3.4 meters (11’ 2’’) long and 2.8 meters (9’ 2’’) wide, tapering toward the front. Each turret has -8° of gun depression, and +10° of gun elevation. The centers of the cannon barrels sit 3.4 meters (1’’ 2’’) off the ground. The distance between the centerline of the central turret and the centerline of either of the outboard turrets is 5.4 meters (17’ 9’’); the distance between the centerlines of the outboard turrets is 10.8 meters (35’ 5’’). Just in front of the outboard turrets, slung between the I-beams of the vehicle’s frame, are a pair of storerooms. It is likely these would have carried everything needed for the vehicle, including ammunition, and provisions for the tank and gun crews. They measure 4.5 meters (14’ 9’’) long, 4.5 meters wide, and 1.2 meters (3’ 11’’) tall.
​
Concealing the turrets is a simple warehouse-like building measuring 8.4 meters (27’ 7’’) long by 15.35 meters (50’ 4’’) wide, and approximately 3.97 meters (13’) tall. The width of the warehouse is the width of the frame discounting the two outermost longitudinal I-beams. This is a difference of 650 mm (2’ 2’’), which implies the width of the I-beams to be 325 mm (1’ 1’’). There is 1.9 meters (6’ 3’’) of space between the rear of the central turret and the front wall of the warehouse, and 0.8 meters (2’ 7’’) of space between the sides of the outboard turrets and the sides of the warehouse. The warehouse is supported by ten vertical supports around its perimeter, and at least five transverse supports in the roof. The barrels of the cannons protrude past the rear wall of the warehouse and are accommodated by a set of doors each. Curiously, in the forward view of the blueprint, these doors are shown to open horizontally, while in the top right corner of the blueprint an alternative arrangement is shown where they open vertically. The set of doors for the center turret is slightly larger than the doors for the other two turrets, as the center turret is farther away, and thus needs more room around the door to afford its barrel the same degree of traverse and elevation.
​
Information from Tanks Encyclopedia