The Peenemünde Arrow Shells were conceived and developed at the Aerodynamic Research Laboratories at Peenemünde from 1942 to 1945. The arrow shells were dart-like projectiles designed to be fired from special smooth-bore versions of standard German Army artillery pieces. The project was initially envisioned and designed as ultra-long-range shells using a 310mm smooth-bored version of the famed 280mm K5 railway gun (Anzio Annie).

The arrow shell was 1.91m long and 120mm in caliber, with four fins at the tail 310mm across and a 310mm sabot or discarding ring around the middle of the shell (center of gravity). The ring was naturally discarded and would fell away outside the gun muzzle when fired, while the accelerating shell would reach a velocity of 1524m/sec and obtain a maximum range of 150km. Two guns were produced, and one of them fired in anger at the US 3rd Army located 125km away from the gun.

There was an anti-aircraft version of the Peenemünde Arrow Shells. The projectile was designed for the 105mm FLAK 39 AA gun, with the goal to reach extremely high velocity so as to shorten flying time and eliminate the need to calculate aiming errors. The AA gunners would be able to aim, fire, and hit without having to worry about the speed of the aircraft and its altitude. During tests and experiments the shells obtained a muzzle velocity of 1067m/sec, which was considered excellent. Nevertheless, development had to be canceled since mass-production for combat use was impossible with the available production and industrial capacity of Germany.

In 1940/41 there were tests with arrow-like grenades for several artillery guns between 7,5 cm and 80 cm called "Peenemünder Pfeil-Geschoss" (PPG) and special concrete-piercing grenades for heavier guns called "Röchling-Granate" (Rö-Gr).

Both types used long subcaliber bodies for minimised drag with discarding centering rings. The PPGs had 4-5 fins on the rear and a sabot.

PPGs were also used by the multi-chambered long range artillery guns like the planned V3 (Hochdruckpumpe) and the Fleißiges Lieschen. Röchling-Granaten were at least used operational at Sewastopol. 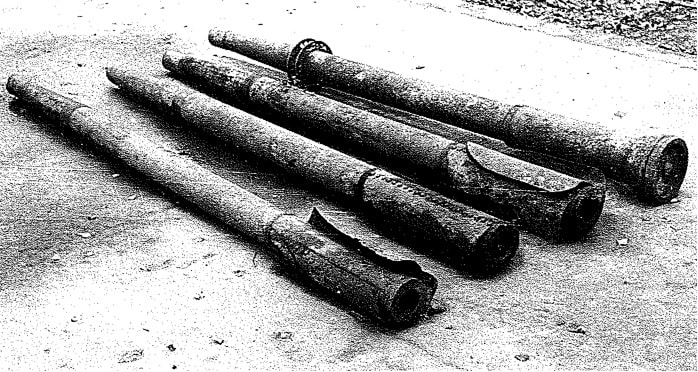