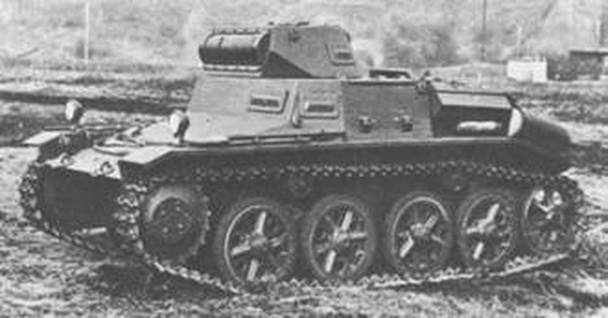 I LaS Krupp
Note the absence of arms, the back part of the body also "nedopererabotana" suspension to its gain, ie there are only two support rollers, there is no blocking of external beams.

1935/36 was one of the test set Pz.Kpfw.I Ausf.A diesel engine Krupp (Krupp M601), but he was able to give only 45 hp capacity, which was extremely inadequate. The idea of a tank with a diesel engine for some time been safely buried.

In 1938, one of Pz.Kpfw.I Ausf.A test set serial 8u cylinder Krupp (Krupp M311 V8). Several such machines were used in the 2nd Division in France.

Collectively called the people "export" option. In fact, there were at least three species. In 1935, Krupp resolution Waffenamt, begins to work well over Leichte Kampfwagen Ausland - export version of his light tank. In 1936, Krupp created two versions, one as LKA1 - MG-Kampfwagen (also known as MG KA/L-10) goes to Chiang Kai-shek, and the other - LKA2 - 2 cm Kampfwagen (also known as 2 cm KA/L-20 ) goes in the trash. Croup well sculptured version LKA2 with more solid arms - 2 cm KAv, but it was then dismantled and used by him in the middle mKA All kinds of such developments continued until 1940, including the finalization of the medium mKA (also known as 4.5cm KAv/M-10 ) armed with 45mm KwK L/50 gun). However, all these "advanced" design brought one very big drawback - the lousy, to say the chassis, and therefore no real production, or anything else and not adults.

In 1935/36 Krupp was also designed Leichte Kampfwagen B (LKB) - a light tank for Bulgaria, which is a Panzerkampfwagen I Ausf.B, equipped with Krupp engine M311 V-8. All three modified versions - LKB1, 2 and 3 rather resembled a 2 cm LKB and were equipped with 20mm automatic cannon. As for the line of LKA, none of the samples in the metal has not been embodied, program development was curtailed.

And, in general, Pz.I supplied allies in the Axis of unknown quantities, apparently by "residual" principle. In 1934, a copy of the tank was sold to Hungary. In September 1936, 50 (and by some estimates a total of 32) of the tank Pz.I Ausf.A was sent to Spain as part of the Legion "Condor". There is evidence that Pz.Kpfw.I shipped to Finland, and possibly in Serbia. Already during the war, in 1942, Hungary purchased yet, apparently, 22 Pz.Kpfw.I Ausf.A to train their crews (served in the 1st Armored Division).

On the eve of the Polish campaign 1939m a few cars for Pz. Rgt .5 and 7 was modified by removing the weapons and installing in his place bronezaslonki observer and installing a loop antenna.

A few dozen tanks modification of A and B were already in parts of the machine conversion of technical assistance Instandsetzug Kraftwagen I. Since the tank was shot tower and cut the top part bronekorpusa. The result of this open cargo bed. They were used for the transport of spare parts, fuel cans, oil and water, for some installed windshield plexiglass canopy over and a cargo platform.

Legky kabeleprokladchik. In 1939 he was released only two such machines. Often confused with Instandsetzug, solely because of izdalya similar enclosures.

Capernaya fighting machine. In the spring of 1940 produced about 70 cars. The tanks were equipped with the necessary equipment for transport to the battlefield combat engineer equipment, such as inflatable boats and assault bridges.

Some machines Pz. I Ausf. A were armed with 3.7-cm antitank guns Pak-35/36 L/45. Experiments have been conducted on the installation Panzerjager.I 5-cm guns Pak-38, but the chassis was overloaded and the project failed to develop. The Germans also experimented with the installation of a 50-mm cannon Rak 38, but the car turned, as it is not surprising, even more peretyazhelennoy, the engine did not cope and this project is also closed. True, the Germans, and this did not calm down, but these things below.

The floating version of the tank Pz-l Ausf.B. Before the "East" campaign have been redone at least 5 units, judging by the photos. At least one hit in an exhibition of trophy art in Central Park named after Gorky. in Moscow in 1945. Pay attention to the specific form nadgusenichnyh asses, not the typical "dry" machines.


Panzer I Ambulance B

So we got to use a converted Pz.I Ausf. B in sanitation purposes. At the only known photos of me exactly the same redesigned tank. And this machine has been used as an ambulance and was shot down in Belgium in 1940. Again, nothing to do with the fact that we offer in this quality manufacturers.

These are miracles of engineering that's feeding the engine with gas. Carved by skilled craftsmen on the basis of Pz. I Ausf. A (with a generator Festbettvergaser, pictured left, an experimental model) and Pz. I Aufs. B ohne Aufbau (small lot). Except none of the Germans and never more gas generators operating on a wooden chock, used in small-scale tank-building is not wise.

In Saarland company Gesellschaft der Imbert-Gasgeneratoren im Saarland, and later in Cologne (at Ford plants) by «Imbert Generatoren GmbH», according to the order «Verordnung über den Einsatz von Schleppern in der Landwirtschaft», experiments were carried out to replace fuel tanks at gas generators remained only one photograph of such a "tractor", but there are blueprints for at least another two options, including the chassis and turret Ausf.B box and the tower of the "quartet".

During 1941-42. developed a new model Pz.Kpfw.I: neuer Art VK 602, verstarkt, Ausf.D - (reinforced) - high-speed reconnaissance tank front armor was strengthened to 60 mm. It was built only a few copies. Since the project was developed by Daimler-Benz/MAN, it is often referred to the family of «Luchs», that ideology is not true, as the family of "lynx" was developed for projects VK901/1601.

Very interesting project based on Pz.I under development VK603, verstarkt, Ausf.D and its continuation-VK1301 has been proposed by Sauer. It was a "concept" with the possibility of motion as the wheels and on tracks, some recycled box and the turret of the original tower design Austrian

Since Pz. I was released in sufficiently large (by the standards of pre-war Europe) and quantities during the war were constantly in technology, "hospital" training units and just sucks, "craftsmen" Wehrmacht izgolyatsya of the car as they could, trying to create out of it at least something worthwhile. Or at least "scary". Such self-made single copies too, in their own interest. So, before you

It is worth mentioning that 15 (some say that 10) serial Pz.I Ausf. A was sent to China, Chiang Kai-shek. Judging by the photos of machines, the Chinese (or Soviet) yourselfers rearmed technique for the Soviet machine guns DP-28. The tanks took part in battles with the Japanese, and a number of cars in 1937 fell into the hands naughty Japanese and the Japanese were in their primitive mass disassembled. That knowing their "great" achievements in the field of pre-war tank, not very clear. :)

Republican craftsmen to put the trophy Pz.Kpfw.I 2.5-cm gun Hotchkiss, they were removed from the French and Polish FT -17 ..


Pz.Kpfw.I Ausf.A with a wide caterpillar

Judging by the photos on this Pz.Kpfw.I Ausf.A tested a wide track. The car apparently altered after the Civil War, as the tanks remained in service with the Spanish army before the 50s.

In February 1942, the VIM (a plant) was suddenly three commanders KI.Pz.Bf.Wg. chassis Pz.Kpfw.l Ausf.B. Naturally, I had them do something. Announced a contest for re, one of the winners was a project of Igor Belikov. He offered to withdraw from all Kl.Pz.Bf.Wg radio, and instead of a machine gun set in a larger set of ball 20-mm automatic cannon ShVAK. In one car cut through the frontal armor of an enlarged recess, which was mounted on bolts cast mask gun. The mask was a "pear-shaped insert" with a gun, supplemented by a simplified trigger mechanism with a handle and shoulder rest. After oprobirovaniya new weapons added a screw gun to install stop, and as such two tanks of the three left for the front. Unfortunately, their subsequent fate is unknown. Photos I do not know.