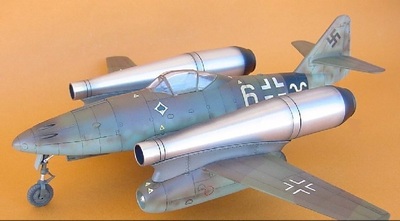 Invented in 1908 by a French man, René Lorin, it consisted of a just a tube; at one end the air enters by the forward motion of the plane and it is compressed by the inlet. Then, the fuel is added and burnt, all the energy being the exhaust, which is expelled at the other end.

From 1941 onwards, Dr Eugen Sanger took the idea of René Lorin and designed ramjets of various sizes, which were tested on an obsolete Dornier Do 17 as test bed. An increasing in speeds of over a 150Km/h were recorded. It was decided to use a Do 217 E to test the bigger engines in the development of a ramjet engine needed to power a supersonic aircraft.

Due to the successful tests, the DFS ( Deutsche Forschunganstalt fur Segelflug – German Research Institute for Gliders ) issued a report suggesting the mounting of two ramjets over the top of the M 262’s turbojets above the wings. These Lorin, which were designed by Dr. Sanger, were to be 3 ft 8,5 ins ( 1,13 mts ) in diameter and no less than 19 ft. 4 ins. ( 5,9 mts ) in length and use normal J2 fuel.
​
The boosted version of the fighter was expected to decrease the aircraft’s climbing time to 10.000 mts ( 32.800 ft) from 26 minutes to 6 minutes, increase its maximum speed by up to 200 Km/h ( 125 mph) and boost altitude by 4000 mts ( 13.000 ft)
On the debit side, the aircraft’s already short range would have been reduced by about four-fifths.
As many other German projects, the Me 262 Lorin never was constructed.