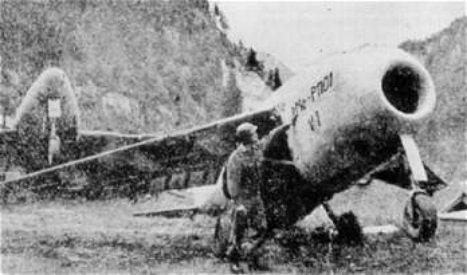 Me P.1101 Third Design:
Full-scale prototype design of a flying test single-seat jet fighter with a wingspan of 8.06 m and a length of 8.98 m. It had a conventional tail and swept wings designed to be set at different angles while on the ground. Test flights were first intended to be undertaken with a 35 degree wing sweep, followed by a 45 degree sweep. The first test flight was to take place in June 1945.

Me P.1101 L:
A ramjet-powered single-seat fighter that would have eight additional small rocket engines for take-off. This design would have a much wider fuselage covering the large Lorin ramjet located to the back of the cockpit, as well as a conventional tail.

Me P.1101/99:
Another very different variant altogether. Two-seat attack/destroyer all-metal aircraft powered by four Heinkel He S 011 turbojets. It had the cockpit at the front end of the fuselage and was armed with a 7.5 cm Pak 40 cannon and five MK 112 55 mm cannons. Its tail was of the conventional type and it had a wingspan of 15.4 m and a length of 15.2 m.