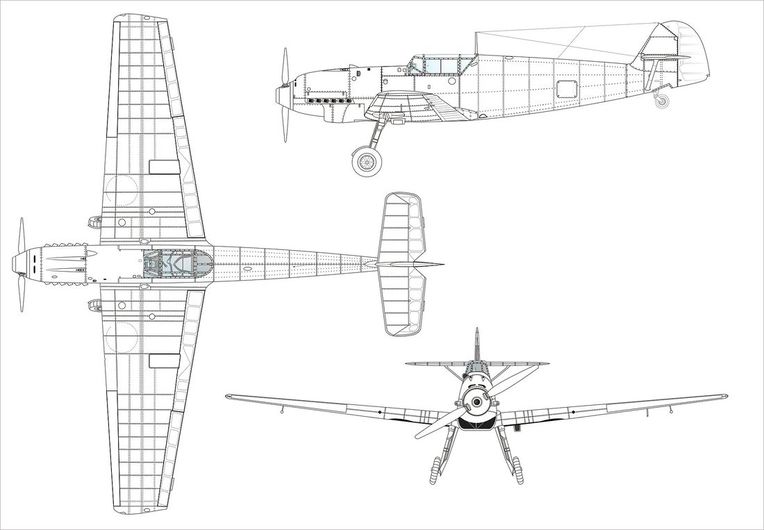 Me Bf 109 T-1
Prior to the war the Kriegsmarine had become fascinated with the idea of the aircraft carrier. Borrowing ideas from the British and Japanese (mainlyAkagi), they started the construction of Graf Zeppelin as part of the rebuilding of the navy. The air group for the carrier was settled on Messerschmitt Bf 109T fighters and Ju 87C dive bombers. The suffix 'T' denotes Träger (carrier) in German use.

The project was cancelled  but interest in Graf Zeppelin revived when the value of aircraft carriers became obvious, and in 1942 the ship was back in the yards for completion. By this time the Bf 109T was hopelessly outdated and a new fighter would be needed. Messerschmitt responded with the updated Me 155A series, but work on the ship was again canceled and the Me 155 was later re-purposed as a high-altitude interceptor. Design work was transferred to Blohm & Voss and the aircraft was then known as the BV 155. The Bf 109Ts were issued to several training units in 1943. Then, in April 1943 the Jagdstaffel Helgoland was formed and operated from Düne until late 1943 when the unit transferred to Lister in south Norway. The unit was renamed as 11./JG 11 as of 30 November 1943 and the Bf 109Ts remained in operations until the summer of 1944, after which some were used in training units in Germany.
​

Bf 109 T-0
Despite references to a Bf 109 T-0 version this version never existed. Seven earlier versions (Bf 109 B, Bf 109 C, Bf 109 E) were converted to test carrier equipment. This included, adding a tail-hook, catapult fittings and increasing the wingspan to 11.08 m (36.35 ft). The ailerons were increased in span, as were the slats, and flap travel was increased. The wings were not modified to be folding since the ship Graf Zeppelin was designed around the intended aircraft, so the lifts could accommodate the Bf 109T with its 11 m (36 ft) wingspan. The wings could, however, be detached from the fuselage for transport purposes, as in every version of the Bf 109.

Bf 109 T-2
After cancellation of the project the remaining 63 of 70 T-1s were built as T-2s without carrier equipment and some of the T-1s may have been "upgraded" to T-2 standard. It was found that the performance of the T-2 was closely comparable to the E-4/N and, because of its ability to take off and land in shorter distances, these fighters were assigned to I/JG.77, deployed in Norway on landing strips which were both short and subject to frequent, powerful cross-winds.