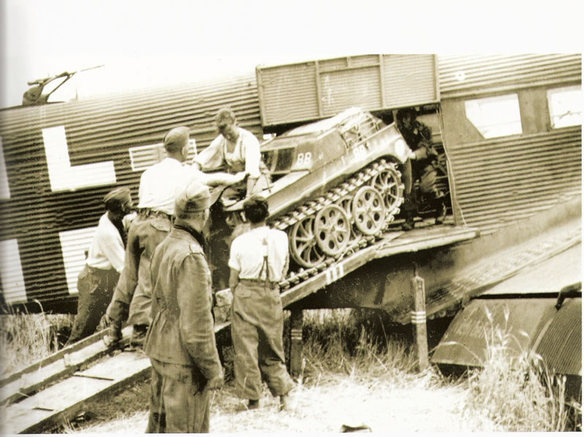 Development of a small, cross-country mobile towing vehicle – which was intended for forestry – was started by NSU in Neckarsulm in 1938. The track drive assembly was very similar to those used on other half-track vehicles in the Wehrmacht. It had interleaved road wheels which were spring-suspended by trailing arms and torsion bars. It was steered by a single front wheel with a handlebar similar to a motorcycle.

The construction allowed driving without front wheel. But this was only rarely done.

A test series of 70 exemplars was ordered and was delivered early in 1940. These vehicles were designated Versuchs Kraftfahrzeug 620. Production of an improved pilot series of 500 vehicles was started in July 1940. The official introduction of the vehicle as kleines Kettenkraftrad (Sd. Kfz. 2) took place on 21st June 1941.

Later, the Kettenkrad was used by nearly all motorised units for liaison and supply duties during muddy periods and winter.

​Beginning in 1944, the Kettenkrad was used by the Luftwaffe as tractor for aircrafts.