The Bison was the invention of Charles Bernard Mathews who was a director of Concrete Limited. At this time, there were many attempts to improvise armoured vehicles, but Mathews had the resources and experience to take a professional approach.

Mathews and his commercial partner John Goldwell Ambrose had been in the Royal Engineers and had a history of wartime innovation with concrete including pre-cast pillboxes and dugouts during the First World War.

Mathews bought twenty four old lorry chassis on which to base the vehicles and made up a prototype to show to local military authorities. Helpful criticism was forthcoming and Mathews was able to produce a version which met the requirements of the Army. Mathews said: "mobile  Concrete pill-boxes will never take the place of armoured cars and tanks, but the enemy would find them a serious obstacle. Their great attraction is that anybody can make them – once he knows how"

Mathews' company trademark was a Bison, hence the generic name for any of these vehicles.

Concrete Limited obtained any chassis they could. Many were old and some dated from the First World War period, one had even seen service as a fire engine and some had not even been converted from solid to pneumatic tyres. With a variety of chassis to work on, Bisons inevitably varied in detail, but were made in three distinct types.

Type 1 was the lightest. It had a fully armoured cab and a small armoured fighting compartment roofed with canvas.

Type 2 had an armoured cab roofed with canvas and a separate fully enclosed fighting compartment resembling a small pillbox on the back – communication between driver and crew must have been difficult.

Type 3 was the heaviest and largest, with a contiguous cabin and fighting compartment completely enclosed in concrete armour. 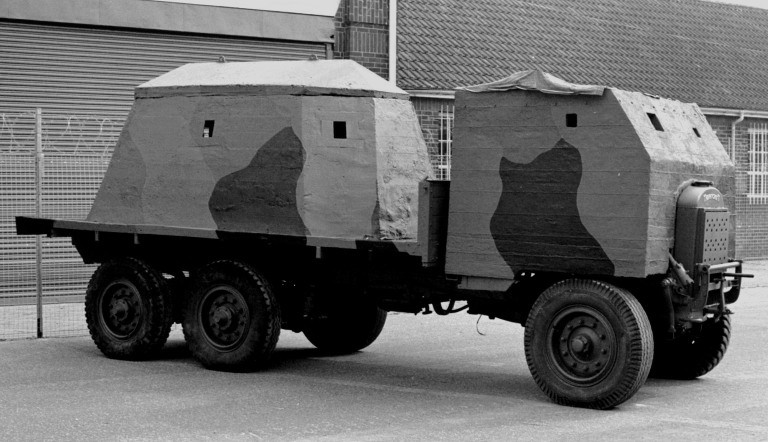