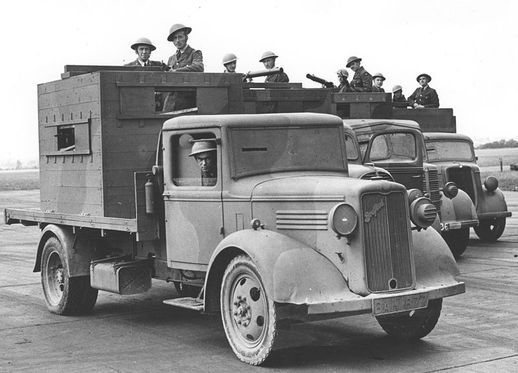 The Armadillo was an extemporised armoured fighting vehicle produced in Britain during the invasion crisis of 1940-1941. Based on a number of standard lorry chassis, it comprised a wooden fighting compartment protected by a layer of gravel and a driver's cab protected by mild steel plates. Armadillos were used by the Royal Air Force (RAF) to protect aerodromes and by the Home Guard.

The RAF started looking for a suitable vehicle at the end of May 1940 and by 4 June they settled on the design destined to be known as the Armadillo. This vehicle was a flat-bed truck, on the back of which was mounted a box-like fighting compartment. The box exterior was made of 7⁄8 inches (22 mm) thick wooden boards measuring about 4 feet 8 inches (1.42 m) by 5 feet 2 inches (1.57 m) and standing 4 feet 6 inches (1.37 m) high; inside this was another, similar wooden box about 6 inches (150 mm) smaller all round; the gap between the boxes was filled with gravel. This provided protection from rifle and machine gun bullets. The fighting compartment had an embrasure on each side, these were about 8 inches (200 mm) high by 18 inches (460 mm) wide and fitted with sliding steel shutters. The fighting compartment had an open top with a beam across it to support a Lewis Gun on a sliding mount. The drivers and the engine were protected by steel plates. Most Armadillos were armed with two Lewis Guns and three rifles.

Variants
Mk I Armadillo was produced with startling speed. Using a wide range of trucks conscripted from civilian service, the first 20 were delivered on 7 June and the complete consignment of 312 vehicles within just a couple of weeks.

Mk II Armadillos would mostly be based on a standard Bedford 1½ and 3 ton chassis.

Mk III Armadillo was always based on a three ton chassis, it had a slightly smaller fighting compartment now occupying only the front half of the truck’s flat bed. On the rear half of the flat bed, a 37mm Coventry Ordnance Works gun was mounted. Fifty-five Mk III Armadillos were made. The crew comprised two drivers and three gunners.

In April 1942, a small number of Mk IIIs had their shingle protection replaced with plastic armour.consisting of small, evenly sized rock or stones in a matrix of bitumen.