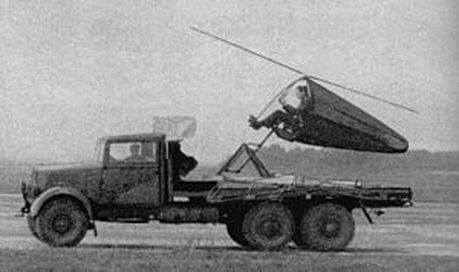 The Rotachute was an autogyro glider. Developed in World War II  was by Raoul Hafner and the staff of the Airborne Forces Experimental Establishment at Beaulieu in Hampshire. It was intended to land a paratrooper armed with a Bren gun after being dropped with the rotachute from a large specially designed transport aircraft.

The Rotachute consisted of a soldered steel tube framework, carrying the rotor and the rear covered with rubberized fabric in which there were two small vertical shutters.

The rotor had two wooden blades articulating on the hub on steel hinges. The hub was attached to a small upright component by a rubber block acting as a universal joint, so that vertical displacement could occur but vibrations were not transmitted to the main structure.

The undercarriage was originally two main wheels joined by an axle placed almost directly below the rotor. Tests led to the addition of a skid. The Mark 2.
The  Mark 3, a version of greater length and with a rigid tail. This final prototype was extensively towed by a Tiger Moth and on several occasions released from a height of more than 1100m.