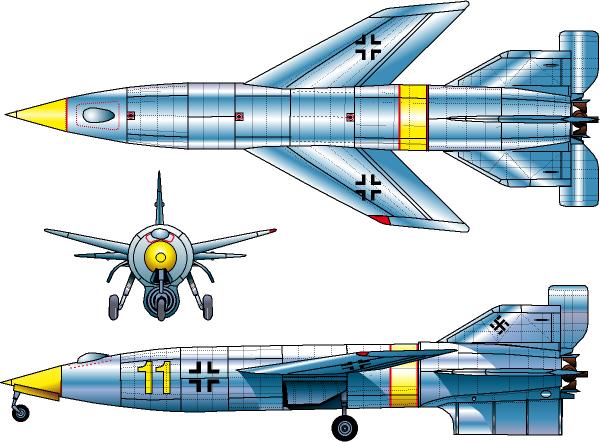 The extraordinary increase of range reached after installing wings for gliding flight on a A4 (V2) missile, drove Werhner von Bruam to design three different manned rocket aircraft. The A4b, manned as an aerodynamic research aircraft, the A9, as an intercontinental bomber and the A6, as a photo reconnaissance aircraft operating at great height and speed.

Actually, the military application of these scientific research programs were emphasized in order to obtain the necessary resources given the wartime circumstances.

The A6 could have been a hypersonic research aircraft, equipped with an auxiliary "Ramjet" engine, which could only be started at very high speeds.

This was feasible in this type of aircraft only at the peak of their trajectory, flying at a very high speed and with no propellant left for the main rocket motor.

Under these conditions, the Ramjet engine (burning synthetic petrol or coal slurry) gave the A6 the possibility to continue its flight for an additional fifteen or twenty minutes without any loss of speed or height.

As a reconnaissance aircraft, the A6 would have been impossible to intercept, but its flight characteristics were above the OKL (German Air Ministry) needs and the project was rejected.

The A6 was to be fitted with a pressurized cockpit, landing gear and braking parachute. it was to be vertically launched like the A4 (V2) and landed on a conventional landing strip by its own means.