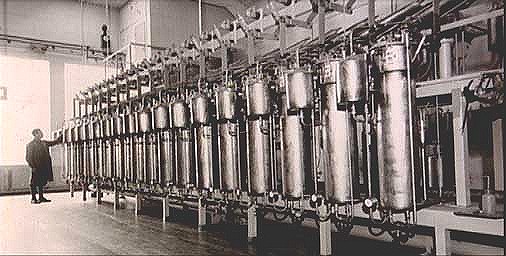 After the Germans took control of the Norsk Hydro plant in 1940, they expanded the number of electrolytic cells from nine to 18, doubling the plant's production of heavy water.
In 1934, at Vemork, Norsk Hydro built the first commercial plant capable of producing heavy water as a byproduct of fertilizer production. During World War II, the Allies decided to remove the heavy water supply and destroy the heavy water plant in order to inhibit the Nazi development of nuclear weapons. Raids were aimed at the 60-MW Vemork power station at the Rjukan waterfall in Telemark, Norway.

Prior to the German invasion of Norway on 9 April 1940, the Deuxième Bureau (French military intelligence) removed 185 kg (408 lb) of heavy water from the plant in Vemork in then-neutral Norway. The plant's managing director, Aubert, agreed to lend the heavy water to France for the duration of the war.
The Allies remained concerned that the occupation forces would use the facility to produce more heavy water for their weapons programme.

The Norwegian heavy water sabotage was a series of actions undertaken by Norwegian saboteurs between 1940 and 1944 to prevent the German nuclear energy project from acquiring heavy water (deuterium oxide), which could be used to produce nuclear weapons.

The sequence of sabotage actions, by the Norwegian resistance movement—as well as Allied bombing—ensured the destruction of the plant and the loss of the heavy water produced.

In Operation Grouse, the British Special Operations Executive (SOE) successfully placed four Norwegian nationals as an advance team in the region of the Hardanger Plateau above the plant.

Later in 1942 the unsuccessful Operation Freshman was mounted by British paratroopers; they were to rendezvous with the Norwegians of Operation Grouse and proceed to Vemork. This attempt failed when the military gliders crashed short of their destination, as did one of the tugs, a Handley Page Halifax bomber. The other Halifax returned to base, but all the other participants were killed in the crashes or captured, interrogated, and executed by the Gestapo.