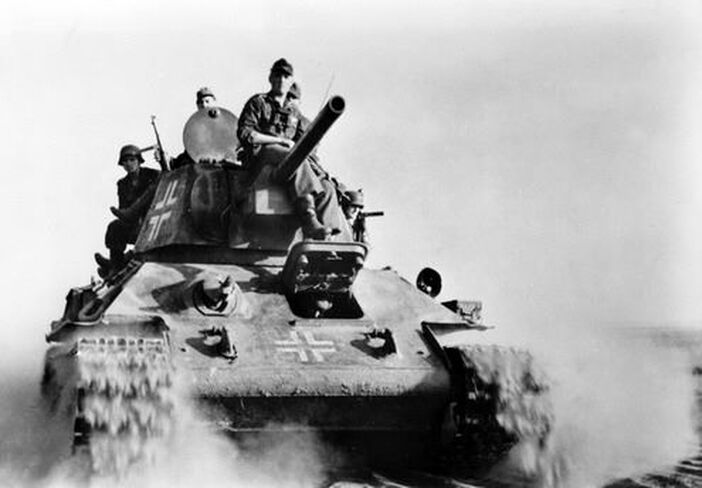 Members of the Freiwilligen-Bataillon “Narwa”, (Estonian battalion Narva) on a captured T-34 tank on the eastern front at the Dnieper in November 1943.
Battalion Narwa was formed from the first 800 men of the Estonian Legion who had finished their training at Dębica (Heidelager in 1943). In April 1943 they  were sent to join the Division Wiking in Ukraine. They replaced the Finnish Volunteer Battalion, recalled to Finland for political reasons.

The Battalion Narva was in the focus of the Red Army's attack near Izjum, Ukraine. The unit entered the battle with 800 men, and only one third were left able to fight. The Red Army, however, suffered heavier losses as they lost over 7,000 men killed and wounded and over 100 tanks were lost.
Battalion Narwa participated in the battle of the Korsun-Cherkassy Pocket. Retreating through the escape route called The Hell's Gate, the battalion came under heavy Soviet fire with little cover. The battalion lost almost all of its equipment during the carnage but most of the troops escaped encirclement.