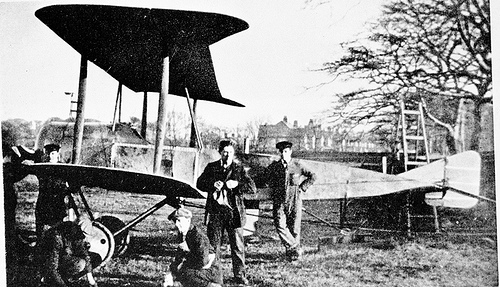 In 1913, the British War Office asked the engineering company Sir W G Armstrong Whitworth & Co Ltd to manufacture aeroplanes and aircraft engines for the Army. Armstrong Whitworth set up an aircraft department, hiring the Dutch designer Frederick Koolhoven, formerly chief engineer of British Deperdussin as chief designer.
​
Koolhoven's first design for Armstrong Whitworth was the small, single-seat, aircraft intended as a scout aircraft. A single-bay tractor biplane, the Sissit, or F.K.1 was fitted with balanced elevators and no fixed tailplane and although designed for an 80 hp (60 kW) Gnôme rotary engine, only a 50 hp (37 kW) Gnôme could be obtained. Fitted with this engine, it was first flown by Koolhaven in September 1914. It was underpowered, and was modified with a fixed tailplane and enlarged ailerons.