"This is Helltown, boy. Different rules here. My lads just spent sixteen days in a living nightmare, killed 'em twelve Gorks and eighty-two Morks. They wanna relax. Wanna cut loose. Get outta their faces, or I'll get into yours."

-Lieutenant Barvio of the Ork Hunters addressing a Mordian sergeant who had repremanded his men.


The Armageddon Ork Hunters are specialised companies formed from veterans of the ork wars on their homeworld. Unlike the standard troops of Armageddon, the Ork Hunters rely on stealth and cunning to take the fight to the enemy and spend months or even years deep in the jungles hunting orks. The harsh environment in which they fight and the conditions to which they are exposed, make Ork Hunters disturbing individuals who seem to gradually lose their minds. They often adorn themselves with trophies and weapons of slain orks and some even go so far as painting or tattooing their whole bodies green.


These guys are fairly simple to convert. Use Catachan minis and give them ork armour and weapons. Adorn them with trophies such as ork heads and make them as barbaric as possible.

Colour schemes: Give them black or brown uniforms and paint their skin green (The Ork Hunters mimic orks in their appearance sometimes going so far as to tattoo their entire bodies green). In other words, make them as orky as possible but don't forget to revere the Imperial Insignia as they are some of the most fanatic ork killers in the galaxy. 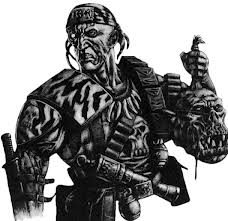 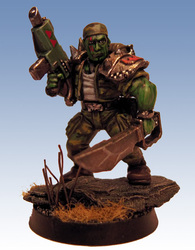 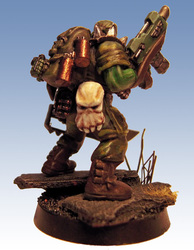