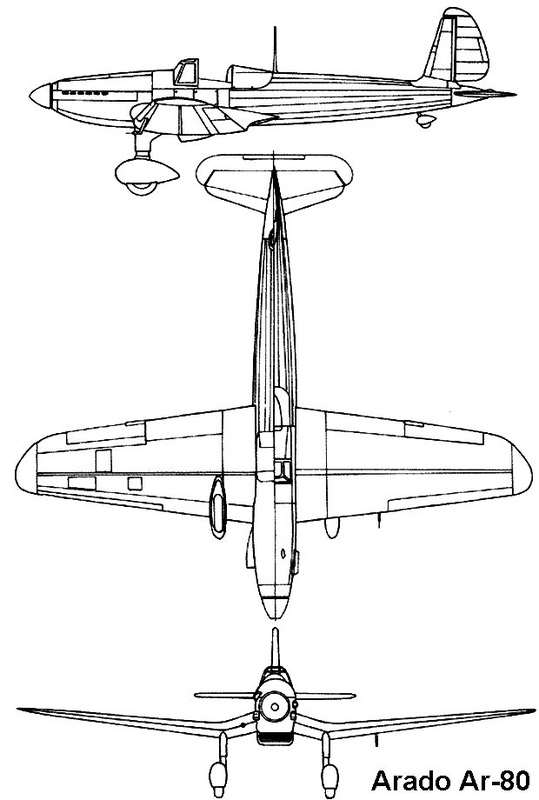 Variants
The design, now known as the Ar 80, was completed without the aid of Rethel; he left the company in 1934 to join BFW leaving Blume in charge of the project.

The plane was designed to mount the Jumo 210 engine, driving a wooden two-blade fixed-pitch propeller. However, this engine was not going to be ready until the contest was supposed to be over, so all of the contestants looked for other engines to fill the hole. In this case Arado proved to have the advantage, as they had already purchased a 391 kW (525 hp) Rolls-Royce Kestrel VI engine for use on their Ar 67 design. The engine had less than optimal supercharging which led to poor performance for the Ar 67.

Ar 80 V1 Prototype first took to the air in the spring of 1935, one of the first of the planes in the contest to do so. However, one of the company test pilots lost control at low altitude only weeks later, and V1 was written off.

Ar 80 V2 was rushed to completion but the Jumo was still unavailable. In order to give the contestants some sort of realistic engine, the RLM had traded Rolls-Royce an He 70 for four 518 kW (695 hp) Kestrel V engines. Although the V was the same basic engine as the VI, it had much better supercharging and was in fact the most powerful inline engine of the day. The various companies competed heavily for access to these engines for their prototypes. Perhaps some idea of the future outcome can be seen in the fact that BFW received two, Arado and Heinkel one each, and Focke-Wulf none at all.

V2 reverted to using a well-spatted and faired set of gear similar to those used on their various biplane designs.

In early 1936, the Jumo engines finally arrived. The 210 had even less takeoff power than the Kestrel, but its altitude performance was comparable. Speed did increase with this engine at higher altitudes, but low-level speed and climb performance both dropped.

Ar 80 V3 In order to save weight, the design had removed the gull-wing and replaced it with a "flat" one, requiring slightly longer gear legs. It also mounted the Jumo 210C with the constant-speed propeller, which boosted speed to 410 km/h (255 mph). By this time, the RLM had already given up on the design, so the plane was not sent for testing and instead hangared at the Arado plant.

In 1937, the V3 was resurrected as a flying testbed for several experiments. It was fitted with a second seat behind the pilot for an observer, and also added an enclosed canopy. The plane was first used for testing a 20 mm cannon firing through the spinner, making it the first German cannon-armed fighter. This system, called the "motorkanone" - an armament format pioneered with the 37 mm cannon-armed French SPAD S.XII in World War I - would become a standard feature of most German inline engined fighter designs during the war.

In 1938, the V3 was rebuilt once again, this time to test a new Fowler Flap design Arado was intending to use on their Ar 198 and Ar 240. Testing showed that the flap was so effective that the lift distribution along the wing changed radically, so a further modification was added to "droop" the ailerons along with the flaps. Testing continued for some time in this form, resulting in the "Arado traveling aileron" and "Arado landing flap".