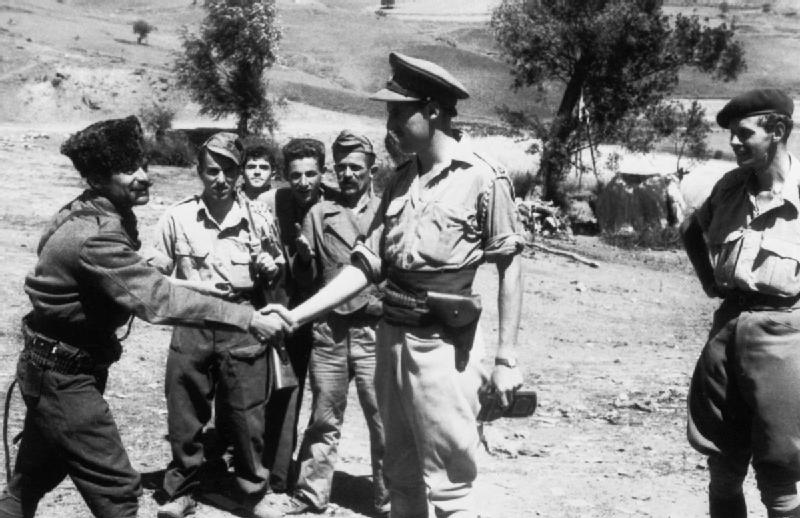 The British had tried mounting liaison operations into Italian-occupied Albania in early 1941, from what was then neutral Yugoslavia. These attempts were quickly abandoned after the Germans and Italians overran Yugoslavia. Thereafter, no attempt was made to contact Albanian resistance groups until 17 April 1943, when M.O.4, a branch of the liaison organisation SOE, dispatched a mission commanded by Lieutenant Colonel "Billy" MacLean, with Major David Smiley as his second-in-command. Rather than drop "blind" into Albania, the mission was dropped into North-West Greece, where British parties were already operating with Greek guerrillas. From there, they made their way into Albania on foot or on mules.

After several false starts, the mission made contact with the NLM. The first supply drop of arms and equipment was received on 27 June. The bulk of the stores received in this and subsequent drops were donated to the NLM, who were the dominant group in Southern Albania, and were used to equip the "First Partisan Brigade".

Later in 1943, SOE increased the size of the mission to Albania. The new commander was Brigadier Edmund Frank Davies of the Royal Ulster Rifles (nicknamed "Trotsky" at Sandhurst because of the "disciplined bolshevism" in his character), with Lieutenant Colonel Arthur Nicholls as Chief of Staff. MacLean and Smiley were withdrawn to SOE's new base at Bari in Southern Italy to report. Although they noted that the Communist-led NLM appeared to be more interested in securing political power after the war than fighting the Germans, they recommended that SOE continue to supply them, while attempting to achieve agreement between the NLM and the other resistance movements.

In January 1944, the Germans attacked and overran the British mission HQ. Brigadier Davies was captured, while Lieutenant Colonel Nicholls died of exposure and post-operative shock after leading the survivors to safety.
​
During the remainder of 1944, SOE continued to supply the NLM, despite complaints from MacLean and Smiley, now running liaison parties with Abaz Kupi's group and the Balli Kombëtar in Northern Albania, that the NLM were using these arms against their political opponents rather than the Germans. Smiley, MacLean and Julian Amery were evacuated to Italy at the end of October. SOE refused to evacuate Abaz Kupi on the same boat, and he made his own escape from the country, being picked up by a Royal Naval vessel in the Adriatic.