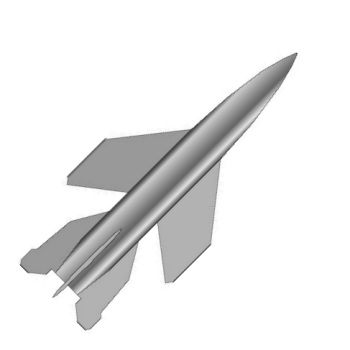 The A7 was a winged design that was never fully constructed. It was worked on between 1940 and 1943 at Peenemünde for the Kriegsmarine. The A7 was similar in structure to the A5, but had larger tail unit fins (1.621 m²) in order to obtain greater range in gliding flight. Two unpowered models of the A7 were dropped from airplanes in order to test flight stability; no powered test was ever performed. The finished rocket should have produced a takeoff thrust of 15 kN and a takeoff weight of 1000 kg. The design had a diameter of 0.38 m and a length of 5.91 m.