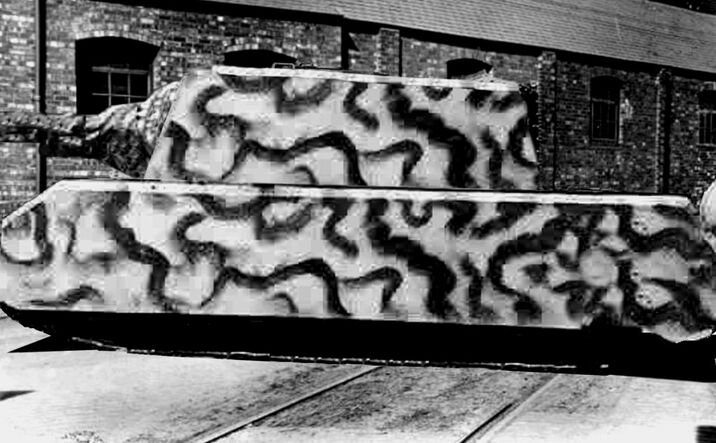 In a Sturmgeschuetzaufbau (Superstructure) 15cm L61 and 17cm L53 were planned for the Maus and in competition with Adlerwerk E-100.

SturmGeschütz Maus was the alternative program to the SturmGeschütz E-100 (often - incorrectly - referred to as Jagdpanzer E-100).

Both projects originated at the same point in time. On 9th May 1944, a meeting was held between Porsche and Krupp, where Ing. Schmidt from Porsche presented sketches of the 150mm L/63 and 170mm L/53 Sturmpanzers based on Maus chassis, developed by Krupp in cooperation with Porsche, that were to compete for the superheavy Sturmpanzer contract with the Adlerwerke and their E-100 - based Sturmpanzer.

In May, the discussions continued with the 150mm variant being favoured over the 170mm. Porsche suggested a Flakaufbau (anti-aircraft miniturret), but that was denied, as it was planned for the superheavy vehicles to be escorted by AA tanks (Flakpanzers).
The plans never reached any serious stage however. In May 1944, there were only rough sketches and conceptual ideas (none of which survived), the pictures above are an impression of how it might have looked. One of the issues of the design was the height - the tall Maus chassis and the superstructure simply made a very tall vehicle, despite the fact Krupp mounted the observation equipment into the superstructure. An ammunition capacity of 85 rounds was planned.

By the end of the May it was decided the E-100 chassis would fit the project better. A mockup was ordered, but it never really happened. On 10th of July, Adolf Hitler personally stopped the development of all superheavy vehicles via Albert Speer (the Maus project itself was worked on until August) and that was the end of both superheavy Sturmpanzers.